Historically, Copper was the first element known to man. The chalcolithic era or copper age saw man progress from using stones as weapons to replacing them with copper. Ancient societies like Ancient Egypt, Rome, Greece, Somalia, Incas, Aztecs and Indians used copper in various forms, from currency for trade to household products. Ayurvedic texts mention the use of copper vessels for drinking water. Copper is the only metal with anti-bacterial properties, which were proved to be true even during the 1800s when copper mine workers were immune to Cholera. Over the centuries copper has been used in various forms to treat various illnesses including cuts, headaches, even varicose veins. The rise of ayurvedic usage and indigenous medicines has seen a rise in the use of copper products in household items, especially copper vessels and cups. We present to you the only metal that has journeyed all through history, without losing its credibility and 13 amazing health benefits of a copper vessel and bottles. 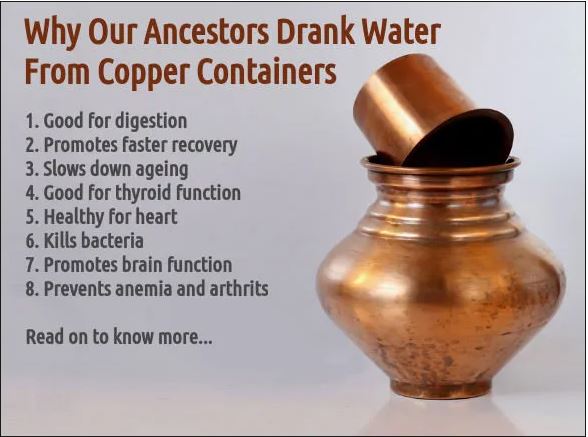 When water is stored in a copper vessel or bottle, for eight hours more, copper releases some of its ions in the water, through a process called the Oligodynamic effect. Copper is known to have antimicrobial, anti-inflammatory, anti-carcinogenic and antioxidant properties. It assists in the formation of hemoglobin as well as cell regeneration and unfortunately, the human body cannot create the trace amounts of copper it requires to function healthily, therefore, copper has to be a part of our intake either through food or water, but the human body is benefitted in several other ways with the presence of copper, here are 12+ amazing health benefits of drinking water from a copper bottle:

Copper is a known antioxidant, which means it fights off all the free radicals and negates their negative effects. Free radicals and their harmful effects have been major causes of cancer in the human body. Copper also helps in the production of Melanin which gives color to one’s skin and eyes, as well protects one from the harmful UV rays of the sun.

According to the American Cancer Society, Copper is known to reduce cholesterol and triglyceride levels.  If the Copper deficiency has set on since childhood, it leads to the development of hypotension however, if adults suffer from copper deficiency they develop hypertension. Therefore, trace amounts of copper are critical for the regulation of blood pressure in a person.

3) Aids the Functioning of Thyroid Gland:

Copper assists in the breakdown of food to make hemoglobin, it helps the body in absorbing iron, the deficiency of which causes anemia. Copper deficiency in the human body can lead to rare hematological disorders which also results in low white blood cells.

Copper has anti-inflammatory properties which provide great relief to patients suffering from arthritis and rheumatoid arthritis. Additionally, copper has bone-strengthening properties, which makes it a perfect cure for arthritis.

Copper a natural antibiotic, water stored in copper bottles for more than 8 hours is free of all such microbial. Copper is effective against E.Coli, S. aureus and Cholera Bacillus among other common waterborne disease-causing agents.

Ancient Roman texts talk about prescribing copper-based medicine to kill off germs in the stomach. Ayurveda claims that drinking “Tamra Jal” detoxifies and cleanses the stomach. Copper also has properties that stimulate peristalsis (rhythmic expansion and contraction of the stomach lining), reduce the inflammation of the stomach lining and assist in better digestion. Copper is an excellent remedy for stomach ulcers, indigestion and stomach infections.

Copper helps clean plaque as well as dilate the blood vessels to increase the blood flow to the heart. Studies have proved that Copper deficiency can result in the dysfunction of the heart muscles, leading to insufficient pumping of the blood, impaired circulation of blood in the body and the inability to respond correctly to stress.

Ancient Egyptians used a lot of copper-based beautifying agents, several skincare products these days are copper-based because copper is not only an antioxidant, it also assists cell regeneration, negating the harmful effects of free agents on the skin and helping to fight off wrinkles and fine lines that come with age.

The human brain interacts with the rest of the body through electrical impulses. Copper helps the cells in communicating with each other by carrying out these impulses, making the brain work much more efficiently.

Copper plays an instrumental role in dissolving the excess fat deposits in the human body and helps reduce weight. Copper keeps the body in a fat-burning situation even when the individual is resting, however, this does not mean that too much copper will burn more fat; too much copper could end up poisoning the human body.

14) Keeps the Temperature of the Body on the Cooler Side

When the food we eat passes into our stomach, it becomes acidic, releasing toxins in the body and thereby making the body heat up. When you drink water from a copper bottle, water upon storage for a couple of hours becomes infused with alkali. This alkaline water helps to balance the acids, detoxify the system and lower the temperature of the body. This is especially helpful during the hot summer months when the body tends to heat up due to the prevailing weather.

People in ancient times used to gargle every morning with water stored in a copper bottle or vessel. This is because copper contains antimicrobial properties and it was believed that when you drink copper infused water it can aid in clearing up throat congestion.

Copper is your friendly neighborhood superhero as far as its benefits are considered, not just to the human body, but to the environment too. It is a cheap metal, available in abundance as well as easiest to recycle. There are several benefits of copper, here are some to our health and our environment at large:

Copper is the friendliest metal in the environment. A good conductor of heat and electricity, Copper is a cheap metal that is also easy to recycle, making it the greenest natural metal. Copper is ideal for making solar panels.

Copper is also the future of nanotechnology, it is interesting to note, that leading IT companies, use copper to make the most powerful computer chips available. In the past few years, copper is being used for bioleaching, a process by which mineral ores are extracted from their supplied ores with the help of elements present in the environment. Copper also plays an important role in managing hazardous nuclear fuel waste.

9 Signs and Symptoms of Copper Deficiency

Claims of Copper’s antimicrobial properties have been documented since ancient times. However, without any concrete scientific research, it is difficult to ascertain if these claims are fact or a figment of our collective conscience. To bust this myth, Sudha et al (2012) conducted a series of tests to ascertain the antimicrobial qualities of water. Cultured Cholera bacteria was introduced to water stored in a copper vessel for over 16 hours. Sudha et al reported after several more tests that copper does have an antimicrobial property, as they weren’t able to extract any samples of Cholera bacteria from the water stored in the copper vessel, whereas, the copper content in water was within the permissible range by the WHO standards.

Another study carried out by the University of South Carolina reported that Copper killed 97% of the bacteria present in ICUs, reducing the risk of contracting hospital-acquired infections by 40%. In June 2016, Natural Chemical Biology published another study, proving copper’s key role in burning fat in the human body. In 2017, U.S. Environmental Protection Agency registered Copper as the only natural metal with properties to kill harmful microbes.

Drinking Water from A Copper Bottle, Correctly and Safely:

Despite all the benefits of copper, one must remember that copper is only required in trace amounts in the human body. One must also remember that too much of a good thing could also become harmful, especially, if we are talking about the delicate balance of human chemistry. Water makes up to 75% of our anatomy, however, one cannot keep on drinking water stored in a copper vessel, all day and every day. Here are a few tips on drinking water from a copper vessel correctly and safely:

Fill the bottle with water and store it in a cool dry place overnight or all day or for 8 hours.

Do not refrigerate the bottle.

The best time to drink water stored in a copper bottle is on an empty stomach in the morning.

Do not overdo it, drinking water stored in a copper bottle twice a day (morning and evening) is more than enough to provide the necessary amount of copper to your body.

History of Copper Vessels and Mugs:

The ancient societies didn’t know extensively about bacteria and other harmful micro-organisms, yet, Copper has found its way in nearly all the ancient medical texts. The benefits and various uses of copper have been recorded diligently in ancient texts from all over the world. Ancient Ayurvedic texts claim that drinking water from a copper vessel cures the three doshas of the body namely, Vata, Pitha, & Kapha by positively charging the water. Water stored in a copper vessel for 6-8 eight hours was known as Tamra Jal.

There have been several arguments against using copper vessels for storing water and intaking the same. Here are some of the frequently asked questions about using copper bottles to store water:

Will using a copper bottle cause copper toxicity?

Copper Toxicity is caused by using a corroded copper bottle. Copper corrosion can be caused by acidic substances especially food items which are acidic in nature and the softness of the water.

How long should water be stored in a copper bottle?

Water should be ideally stored for 6-8 hours in a copper bottle to gain maximum benefits from it.

Can we store anything else in a copper bottle?

No. Only water can be stored in the copper bottle, other substances may have different acidity levels or chemical structure, and copper can react with the same, making it harmful for the human body.

Can we store hot/cold water in the copper bottle?

It is suggested that the water stored in the copper bottle must be room temperature, neither too hot nor too cold. Temperature can play an inverse role on copper.

How to clean Copper Bottles?

Pure copper oxidizes when exposed to oxygen and liquids. The best way to clean a copper vessel is to scrub it with lemon juice and salt, to remove the oxidation stains.